You are here: Home / Readers / Book Reviews / The Wilds by Jules Hedger Review 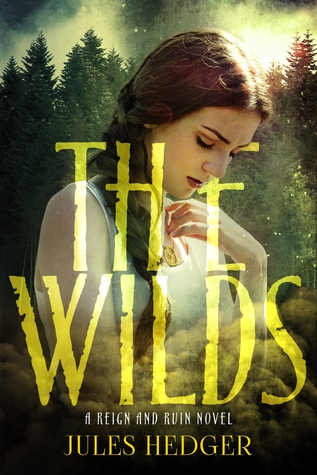 Summary (Goodreads):
Coming home to New York in summer holidays is nothing short of torturous. Maggie’s mother is officially the worst widow ever and her wayward uncle can’t see past the heroin or the twisted pictures he paints. Lonely is normal and normal is becoming unbearable.

Plagued by nightmares and left behind to pick up the pieces of a fallen king, an opportunity of escape leads Cirrus to take a dangerous gamble; a gamble that snatches Maggie out of her uncle’s apartment and into a dangerous world of shifting sand and treacherous beauty.

Now Maggie must fight for a nation she never knew existed. But who can she trust when everything around her is melting like paint? Even more, the man she’s fighting against is at once the captor and her savior, the villain and her friend. They could be each other’s salvation or destruction, the choice is up to them . . .

One of my favorite things about starting a new series is getting to know the world the author created. And I love it even more when said world is unique and fascinating and overly colorful. I bet you can imagine my thrill when I found out that the world in The Wilds, named Palet, met these criteria perfectly. I was drawn into its beauty and complexity, and I just wish I could jump inside the pages and explore every inch of this ever-growing world made out of dreams, of endless possibilities.

Setting this awesome world aside for a bit, I have to point out that when I started reading The Wilds, I struggled to care about the main character, Maggie, and to understand on where the story was heading to. It’s an abrupt start since we barely get to meet Maggie as she’s heading to her uncle’s place to stay for the night, and next thing you know, her uncle dies and she’s swept into Palet to take her rightful place as ruler (being the niece of the creator and all), or at least, to fight for the crown in the Reign Walk. And, that’s when everything clears up and the story sets into action.

Despite my initial thoughts about Maggie, I did come to like her character as the story progressed. Her journey is a tough one and confusing as hell, and since many secrets are being kept from her, specially on how the world works, I think she does a fine job of taking care of the situation regardless of the outcome.

The other characters of this book are weirdly interesting, like Cirrus who’s the main antagonist of the book. He is the one going against Maggie for the crown and wants to have her to share their minds and relieve him from his nightmares. Yup, he’s mad, but there’s also something about him that calls you in. My feelings for him are exactly like Maggie’s, I feel like wanting Maggie to be near him, but I also want him thousands of miles away. Confusing, I know.

The one character I DO want near Maggie is Lucen, Cirrus’ brother. He’s a strong, brooding character who’s out to help Maggie during the Reign Walk and he’s peeeerfect. Okay, not really, but I like him, secrets and all.

There’s so much room to explore in this world, in this story, making me super anxious to read the sequel. I want to piece together every hint and dream and see the series come into full bloom. I want more from Maggie, more from Lucen, more from the Painter and heck, even more from Cirrus. I won’t rest until I discover the true intentions behind every character and see how important they are for the world of Palet. I need to know!

P.S. This book is currently free!