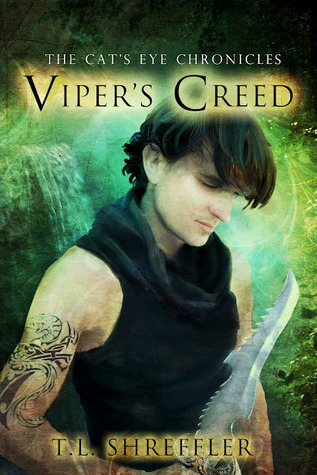 Summary (Goodreads):
Sora is having visions. Strange, terrifying visions brought on by her Cat’s Eye necklace, an ancient and magical device. Spurred to action, she leaves her mother’s cabin to find Crash, the mysterious assassin who once changed her life. She is certain that together, they can discover what the necklace is trying to tell her.

Crash is still on the run from the dark sorcerer, Volcrian, but now a plague is spreading across the land. Volcrian’s quest for vengeance has awakened something far more evil than himself; a force that could destroy the entire kingdom. Together, he and Sora must harness the power of the Cat’s Eye and kill the sorcerer before it’s too late….

Must.Read.Book.Three. NOW. Gah, I’m OBSESSED with this series. I just love how fun it is to read about the characters, the quest they are on and the endless talk about magic.

Viper’s Creed starts off a year after Sora’s Quest ended. It’s also been a year since Sora last saw Crash or Burn, her kidnappers turned friends. She has been training hard at her mother’s house, but after she begins having visions concerning a curse running around like a plague, she sets off to find them.

The adventure is just as exciting as the last book, maybe even better. I liked how this time we get to travel and meet new towns and interact more with the world. Meeting the dracians (another magical race that can turn into dragons) was fantastic and I had a blast. That scene where they are running with them away from the authorities was so funny, had me giggling the whole time.

But the slow-burn romance between Crash and Sora is THE thing I look forward to the most within the book. I mean, they haven’t even kissed yet, or even admitted their feelings, but it’s THERE. The small moments between them made my feels have feels of their own. And, the last big act that Crash did to save Sora in this book was so amazing, I basically forgot right there about every book boyfriend I’ve ever had.

The only thing I didn’t particularly enjoy was Lori’s point of view in this story. Every time I would reach her parts, I would instantly get bored. Good thing they were short, but I hope that in the next book they get more interesting. And my only regret about reading this book was my reading experience. The ebook I purchased was faulty and it would crash every time I would finish a chapter. So it was a really slow process, but since I wanted to read the book so bad, I pushed myself and tried to be patient. It was worth it.

I’m really happy with how things are going with this series and I can’t wait to get my hands on book three. It’s fun, it’s magical, and my favorite kind of read. Highly recommend!