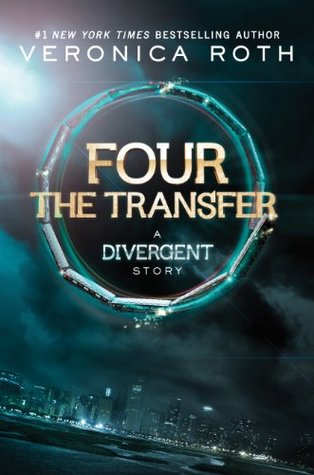 Summary (Goodreads):
Fans of the Divergent series by #1 New York Times bestselling author Veronica Roth will be captivated by “Four: The Transfer,” the first of four stories, each between fifty and seventy-five pages long, set in the world of Divergent and told from Tobias’s perspective.

In “The Transfer,” readers witness Tobias’s aptitude test, Choosing Day, and the moment he is given the infamous nickname “Four.”

I decided to read this first novella in the Divergent Trilogy before listening to the audiobook of FOUR which features all four novellas in Tobias’ (a.k.a. Four) point of view. I was a bit hesitant to try these out since I wasn’t THAT fond of Four’s point of view in Allegiant, but I’m happy I did since I liked this novella a lot.

I think the main reason is that Tobias in this story reminds me of how Tris was at first in Divergent. They don’t exactly have the same background story, but the wonder, doubts, and fear of changing factions was extremely similar. The only difference has to be that while Tris was thrilled and determined to prove how much she’s worthy of being Dauntless, Tobias was doing it only to escape.

Going into his fear landscape was also cool although nothing new since it’s the same one we visited with Tris when he showed it to her. But I liked to read about the moment when he got it, how effortlessly it was given to him and how he grabbed it as his new identity.

Overall, this novella was a good read and just as exciting as Divergent. I think I’m ready now to listen to the rest of the novellas and I’m hoping they will all turn out as good as this one.