You are here: Home / Readers / Book Reviews / The Calm Before by Jules Hedger Review 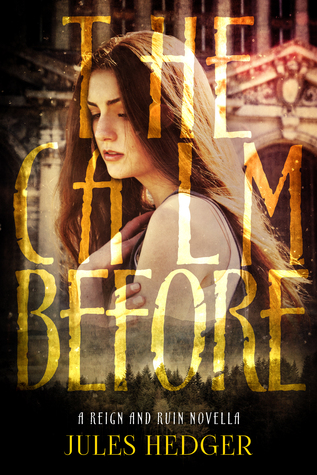 Summary (Goodreads):
Three men. One girl. The stage is set for the storm to hit.

Maggie’s story did not begin with a fall into Palet. Before she gave up her life on Earth to enter the Reign Walk, her fate was long decided by three points of a triangle: Marty, Cirrus and Lucan.

In this special Reign and Ruin novella, spend time with the men of the Wilds in their final moments before the Daughter of Palet entered the room and changed their lives forever.

I really liked this prequel novella to The Wilds. It portrays three of the most prominent male characters of the first book in the Reign and Ruin series and it gives a nice insight on the roles of each.

The first character that comes into this novella is Marty. We get to know him a little bit more before he learns about the death of his friend (the painter) and how messed up things are with him. Next is Cirrus’ turn. Cirrus is reveling with the knowledge of the painter’s death and highly anticipating the arrival of Maggie into Palet. He opens up to the reader about what he intends to do with the “traitor” of his brother, Lucan, and his future plans for the Reign walk. Finally, we also get to step into the mind of Lucan, Cirrus’ half-brother, and get a gist of what he’s dealing with before he falls into temptation.

The Calm Before was a fun read and I was happy to be back to the world of Palet if only for a short time. I liked how  it didn’t affect my thoughts about the characters, but instead helped clear away some confusion, especially one I had about Cirrus and Lucan. Those two are pretty interesting characters, and they get better by the second.

This novella is one I would recommend to be read after reading The Wilds, not before, since this way you’ll have a better grip on each character’s personality and know where they truly stand. But of course, if you want to go ahead and skip this one, you won’t be terribly missing out, it’s just a short read to complement what we know about Marty, Cirrus and Lucan and how things are before the big storm strikes.

Oh, and I know I’ve said it before but I’ll say it again: Jules Hedger’s fascinating new world is one to watch out for and I’m counting the days till I get my hands on the second book in the Reign and Ruin series!